This digital collection showcases archival material relating to the economic and epistemological uses of gossip in US American literature and culture in the nineteenth century. It is part of the DFG-funded project "Economy and Epistemology of Gossip in 19th- and early 20th-century Literature and Culture." The collection displays selected objects of study as well as research-related output which stresses the importance of gossip in understanding the growing public presence of women in various professions as well as the relevance of gossip as a source for historical research on relationships and networks. In this context, we also hope to provide insight into some particularly insightful examples for the ways gossip travels through archives.

Actress Charlotte Cushman quickly emerged as the perfect case study for thinking through women’s participation in the public sphere and the role of gossip (as both source of information and object of study in its own right), as we trace the role and relevance of gossip – both private and mediated – to her reputation and legacy. Charlotte Cushman (1816-1876) was the first renowned US American actress to be successful on both sides of the Atlantic. Born in the US, she advanced her career by moving to England. In the 1850s and 1860s, she lived in Rome for an extensive period of time. She was thus introduced to and formed social circles both in the United States as well as in Europe. Her same-sex relationships as well as her gender-bending performances and attitude in daily life required Cushman to manage her reputation carefully. The selected corpus of archival documents comprises both publicly circulated texts as well as private life writing.

The archival material collected from various archives in the US consists of a range of different types of documents: letters, diary entries, articles (both from the archives or online databases), cartoons, digitized photographs and paintings, transcripts from former Cushman researchers, auto/biographies, etc. Users can access these documents on so-called item pages that display (often standardized) metadata, descriptions about content and contexts, tags (linking items according to content-related or time-specific categories), (semantic) relationships to other documents/people/events/etc., maps, timelines, and transcriptions of handwritten archival documents. Based on our research questions, we assigned the items to different exhibits such as press coverage or Cushman's networks. For more information about annotations, plugins, and metadata, please visit our user and annotation guidelines.

Our second collection, Gossip Columns and Columnists, showcases the increasing presence of gossip in articles and columns in various US American magazines. One key example is the work of foreign gossip correspondents, primarily Anne Hampton Brewster and Grace Greenwood who lived and worked in Rome and Florence in the 1850s to 1880s. The exhibit "Gossip and/as Foreign Correspondence" allows users to follow the private correspondence and public output of Brewster and Greenwood respectively. Our presentation for the Speculative Endeavors Conference (Oct 21-23, 2021) was also dedicated to that topic. Another exhibit in this collection, "Writing (about) Gossip" collects nineteenth-century definitions of and commentary on gossip and its epistemological value. The exhibit also offers an overview of gossip columns in such major magazines as Godey's or Harper's Bazaar, their runtime, and stylistic characteristics. In the exhibit Gossip in Black Periodicals, we highlight the work of Lillian A. Lewis and other Black female journalists who rose to prominence in the 1880s and 1890s.

For updates on the larger research project, see our blog (WordPress). For a full list of secondary sources, a selection of primary texts, and an overview of archives (with abbreviations), please see our sources page. 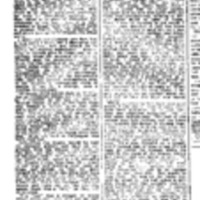 An account of an "exciting" incident during her time in Brandy and Culpepper, Virginia, written by Lillian A. Lewis. Credit Boston Public Library 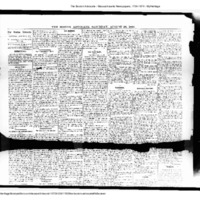 An example of the column "Bridgeport Gleanings" in The Boston Advocate where the readers are informed about social and political affairs, religious events, and news about prominent members in the community. In this particular instance, the column reports: the arrival of soldiers in… 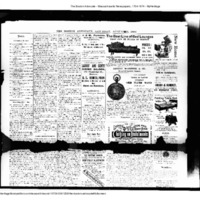 A sociocritical poem written by an anonymous author about gossip. Credit My Heritage (via Boston Public Library)

The collection stores items related to the question of how gossip was talked about, referenced, and used in nineteenth-century periodicals. It…