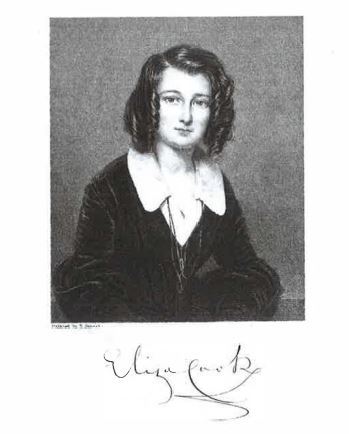 Charlotte Cushman fosters the business relationship between Sarah Hale and Eliza Cook. Cushman and Cook meet for the first time in May 1845 (London) when Charlotte appears as Bianca in Fazio (Merrill 141).
She writes for the New Monthly Magazine, the Metropolitan, and the Literary Gazette.
She publishes her own feminist Eliza Cook's Journal at the end of the 1840s.

Eliza Cook regularly published for the Weekly Dispatch, growing close to its proprietor Alderman Harmer and his family (Merrill 143). Cook's "intimate relations with other women even before she met Charlotte Cushman, and her  unconventional demeanor, left her vulnerable to scandal" (Merrill 144).
Mary Howitt's observed in her diary that, by dressing alike, Eliza Cook and Charlotte Cushman "signaled their attachment to each other, and the intimacy of their relationship" (Merrill 145).
Unfortunately, "there are no existing letters between Charlotte and Eliza" (Merrill 150)

"[...] as Charlotte and Matilda rehearsed for their debut performances as Romeo and Juliet, Eliza Cook turned her attention from poetry to journalism and soon launched her new periodical, Eliza Cook's Journal. Although Eliza Cook wrote most of the material in the weekly journal herself, Eliza Meteyard and other popular journalists were frequent contributors, as, most likely, was Matilda Hays. With its decidedly feminist stance Eliza Cook's Journal was a compendium of essays, poetry, reviews, and fiction that particularly addressed issues such as women's education, dress reform, temperance, and the plight of the working class and domestic servants." (Merrill 159)

"Charlotte received the news, in the summer of 1850, that Eliza Cook was deathly ill. Without hesitating, Charlotte canceled her tour and immediately sailed back to England." (Merrill 166)

"Like Annie Brewster and Rosalie Sully, young women in England found in Charlotte a strong attraction. […] For Vistorian girls such a young woman held unique interest, a kind of wish fulfillment. That she could amuse and entertain only strengthened her hold, a bond that did not always please Charlotte herself. Two years her junior, Eliza Cook soon became a constant companion. And in that fact centered a buzz of comment that eventually reached Philadelphia. Charlotte's diary for May 10 carries the cryptic results, "Letter from Rose, breaking my heart." Rosalie's letter of May 11 brought further tears. "Oh forgive me, dear Charlotte, and believe me when I tell you again and again that my love for you remains firm and unshaken spite of all the cruel reports that are circulated against you." Parted for two years, they must drag along a wretched existence until time proved to the world Charlotte's innocence. Charlotte must remain assured that "I am as fondly yours as ever I was the 6th of July last – that pledge I still wear." Since her departure, the bracelet had never been unclasped. […] Cruel or not, the reports surrounding her friendship with Eliza Cook did little to lighten the social pressures upon her. […] If wanting the family with her in England had something to do with a desire to cancel the difficult rumors, it also had much to do with a flowing heart" (Leach 157-158)

Lillian Faderman argues that "Charlotte Cushman and Eliza Cook were too much alike. Their romantic friendship could not last long, since each had to possess the limelight" (Surpassing the Love of Men 223).